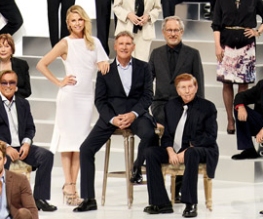 Paramount Pictures has been responsible for some of BFF’s favourite films over the years, and it’s really rather novel to see the collective casts of Star Trek, Indiana Jones, Iron Man and Mission Impossible all but holding hands on stage.

Of course, no studio has a clean track record, and Paramound needed to fill a hundred places (actually 116 if you can be arsed counting). As such, nestled in amongst such greats as Jack Nicholson, Morgan Freeman, Natalie Portman and Anna Kendrick are representatives from Transformers: Dark of the Moon, Jackass and Nacho Libre. Yes, that is Jack Black sitting within cooties distance of David Lynch. And him hanging from the banister like some sort of not-so-great ape? That’s, er, that’s Justin Bieber.

Have a go and let us know who you find. Vanity Fair have even uploaded a handy image that lets you zoom and caption each individual perfect/plastic/past it face.

All that leaves, then, is to wish Paramount another illustrious century of cinema. In the end it just about all shakes out. They did, after all, give us How to Train Your Dragon.