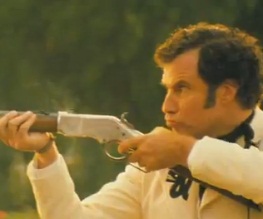 Months after first seeing a trailer so patchily thrown together that we didn’t even bother to report it, Will Ferrell’s Spanish-language satire of Hispanic telenovelas Casa de mi Padre finally has its first substantial teaser trailer. And it’s like being shot in the face with a cannon full of castanets and paella and bootlace ties and maybe some stinkin’ badges.

That actually looks brilliant. Just a few of the things we’re excited about:

– Seeing if Will Ferrell can actually make Americans watch a subtitled film
– Finding out if it was a velociraptor that gave him those cuts on his cheek
– Getting a white suit like that one and robbing a Post Office while eating a burrito
– The new series of Sherlock (not relevant to this, but still very exciting)
– Quoting lines to other vaguely Spanish-speaking film critics and being way smug

What do you think of this trailer? Let us know below!