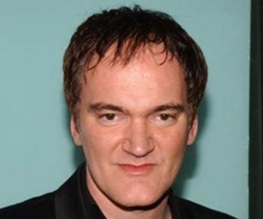 Quentin Tarantino – who is about to be somewhat dubiously awarded the accolade of Director Of Our Lifetime by Total Film – has teased the possibility that his upcoming quasi-Western Django Unchained might be part of a loose and unofficial trilogy.

“I don’t know, Inglourious Basterds and Django Unchained bespeak a trilogy,” he says. “As different as they are, there is a companion piece quality. There might very well be a third one. I just don’t know what it is yet.”

So it appears that Tarantino means trilogy in the very loosest sense here, much in the same way that Edgar Wright‘s Blood and Ice Cream trilogy isn’t really a trilogy, it just features films of a similar feel and style. While all of Quentin Tarantino’s films feel like they could be related – particularly the opening trio of Reservoir Dogs, Pulp Fiction and Jackie Brown – the trailer gives a fair indication that Django Unchained will have the same sense of pulpy, violent fun and humour that dominated Inglourious Basterds.

Quite what the third film in his “trilogy” would be is anyone’s guess, but having tackled two Hollywood staples in World War 2 and now a Western, it seems likely that he’d put his own post-modern spin on another recognised genre.

For what it’s worth, we think a Tarantino noir – a Tarantinoir – could be a beautiful thing.

Do you have an idea that might suit Quentin Tarantino better? Let us know below!

Previous: Cloud Atlas suffers DOA opening weekend
Next: On the perils of the unknown