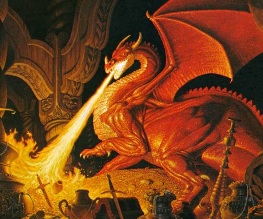 We’ve all seen The Hobbit trailer. There are dwarfs aplenty, hobbits by the handful (well, at least one) and more elves than you can shake a stick. It looks very nice, Peter Jackson, don’t get us wrong… but it seems distinctly lacking in any real dragon action.

Where in Erebor is Smaug?!

Thank Gandalf for Benedict Cumberbatch, who will be (believe it or not) lending his dulcet tones to the movie as THE VOICE OF SMAUG HIMSELF! Keen to put an end to the unbearable suspense of J. R. R. Tolkien fans everywhere, good old Cumberbatch has revealed everything he knows about the scaly fiend’s role in the much-anticipated movie.

Here’s the trailer once again, just while you mull things over…

Okay. You asked for it. Here’s what Benedict had to say about the whole affair:

“I think my eye might open at the end of the first film and then you’ll get the rest of me in the second.”

Wait, what? No dragon action at all for the first film? NONE AT ALL?! By Thorin’s beard, we don’t know if we can wait for the second film, The Hobbit: There and Back Again – it’s not coming anywhere near our screens until 2014.

Peter Jackson, you are a cruel man. A cruel and overwhelmingly talented man. Consider our appetites whetted.