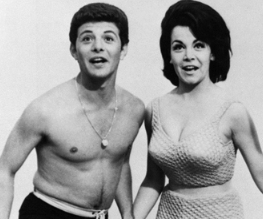 Annette Funicello, original mousketeer and ultimate beach icon of the 1960s, died yesterday aged 70. Annette was just 13 years old when she joined the The Micky Mouse Club – singing, dancing and telling stories. Way before Britney, Christina and Justin she appeared in the iconic mouse ears, a pleated skirt and a turtleneck sweater, and was reportedly the most popular mousketeer in the cast. She considered Disney a mentor throughout her life, saying, “He was the dearest, kindest person, and truly was like a second father to me.”

When she outgrew the kids’ roles in the early Sixties she joined Avalon to make a series of Beach Party films that were the first to exploit the growing teen market. She quickly became synonymous with this new genre. The popularity of the Beach Party films came from their uniqueness: the surf setting (which was a perfect excuse for lots of oily muscles and bikinis), the complete absence of authority figures, musical numbers and the playful but innocent portrayal of sexuality. Often the storylines were absurd: the first of the films, Beach Party (1963), was about an anthropologist who is secretly studying the ‘wild mating habits’ of Southern California Teenagers who hang out on the beach. Bikini Beach (1964) is about a millionaire who is convinced that the teen beach goers are so senselessly obsessed with sex that their mentality is below that of a primate. This is proven by a chimp called Clyde, who can surf, drive and watusi better than anyone on the beach. In these films Annette was considered to represent the all-American ideal of 60s spunky but wholesome sexuality and she went on to star in some of the best named films in cinema history: Muscle Beach Party (1964) Beach Blanket Bingo (1965) and How to Stuff a Wild Bikini (1965).

Watch the trailer for How to Stuff a Wild Bikini (1965) and you’ll get the idea:

Funicello and Avalon reunited again in 1987 with Back to the Beach , a nostalgic parody of the Beach Party genre, and it was then she noticed she had difficulty walking. After being diagnosed with Multiple Sclerosis she decided to be open about her illness as she was worried people would think she was drunk. Sadly she died in hospital earlier this week of complications relating to MS, and she will be greatly missed. Bob Iger, Disney Chairman has said, “She will forever hold a place in our hearts as one of Walt Disney’s brightest stars, delighting an entire generation of baby boomers with her jubilant personality and endless talent.”

Previous: Man of Steel’s new tv spot
Next: First images from 300: Rise of an Empire