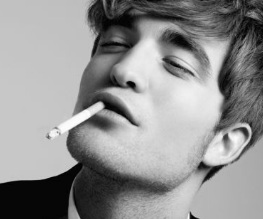 Robert Pattinson seems to have finally cracked the world of movies in his post-Twilight career (the less said about Bel Ami the better!) with latest film Cosmopolis. And he’s done that WITHOUT the excessive overuse of glitter makeup or hair products too.

Well done you, Robert Pattinson. We guess your ever so public split from scheming trampire Kristen Stewart won’t sting quite so bad now. After all, there’s nothing like being dubbed the ‘most likely Twilight actor to succeed at life’ to brighten up your day!

Paul Dergarabedian, president and resident big wig at Hollywood.com, jumped on the Pattinson praise-wagon by setting the Cosmopolis actor head and shoulders above the likes of bullet-headed Taylor Lautner and Snow White And The Husband Stealer‘s Kristen Stewart.

“Perhaps of all the Twilight folks, he’s the one, with this movie, who has gained credibility… His personal life has not been great, but his acting life is just beginning. I think Pattinson has a lot of gravitas, and that translates on screen.”

Hmm. We guess it COULD be possible that the former Cedric Diggory has everything to play for now he’s severed ties with the Twilight franchise, but we just can’t stop picturing the constipation-meets-vampiric-lust expression he pulled in the first ever Stephenie Meyer film.

Whatever we think, there’s no denying that Cosmopolis, directed by David Cronenberg, has done pretty gosh darn well in the box office so far! It’s piled up a tidy $70,339 in just three cinemas in a single weekend, according to box office tracker Hollywood.com. Add that to the takings of a scattering of cinemas in North America – including Canada – and the philosophy laden flick has made about $266,900.

We guess we’ll have to see how it does NEXT weekend, when the film moves into the realms of “nationwide limited release” in 60 cinemas across the US of A.