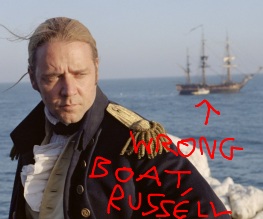 Almost a year after Darren Aronofsky first started going on about making an film based on the story of Noah (boats, animals, yadda yadda), his nautical epic finally has a star. Rumours started bouncing around a clear three months ago that Russell Crowe could be in line to play the boat-building chief of the HSPDA (that’s the Hebrew Society for the Prevention of Drowned Animals, natch), and Australia’s Angriest Man has finally decided that he’s up to the challenge. After all, it’s not the first time he’s had to wear a stupid wig on a massive boat.

Aronofsky and his The Fountain co-writer Ari Handel have produced a script which was revised by John ‘Gladiator‘ Logan – he already knows which words are too hard for Crowe to say, happily. In a truly spectacular luvvie moment, Aronofsky had this to say about the decision to cast Crowe:

“I’d like to thank Paramount and Regency for backing my team’s work to breathe new life into the biblical epic. I rejoice that Russell Crowe will be by my side on this adventure. It’s his immense talent that helps me to sleep at night. I look forward to being wowed by him every day.”

Careful your swollen head doesn’t tip the boat over, Russ! And if you need your creepy twin Gerard Butler to come on set so that the Russells can come marching two by two, you just let us know.

What if it turns out Russell Crowe is just shit at acting on boats?