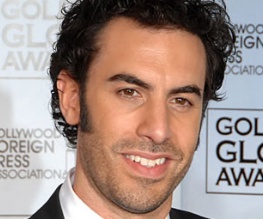 No, really. Paramount have managed to secure the rights to funny-man Cohen’s new project by giving him two goats; one delivered to his LA home, and one to his Beverly Hills offices.

Word is that four major studios were battling for the new film – as yet untitled – and with no end in sight Paramount decided that a slightly different approach was needed. So they did what any self respecting multi-billion distributor would do. Put a Paramount T-shirt on a goat. Luckily, Baron-Cohen appreciated the gesture (who wouldn’t?) and agreed to sign with them for a princely sum of $20 million. Someone rookie in Paramount is getting serious pats on the back right now.

So what is the project? Well heres the pitch (via NY magazine)

“In the laugher, Sacha Baron Cohen (repped by WME) plays dual roles: both a goat herder and a deposed foreign dictator who gets lost in the United States. Cohen wants to keep the storyline close to the vest, but we’re told it’s in the spirit of Coming To America meets Trading Places”

Well, its worth one goat, maybe, but two is pushing the boat out.

Was Cohen right to sign? Let us know your thoughts below!

Previous: The Alien Prequel Will Have A Sequel?
Next: Get Ready For The Ring 3D!