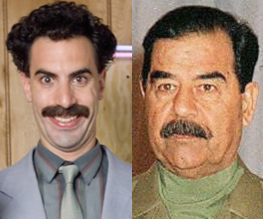 It’s all going a bit Charlie Chaplin. Sacha Baron Cohen has reportedly signed on to play a dictator ‘inspired’ by Saddam Hussein in, you guessed it, The Dictator – it’s even got a similar title to Chaplin’s legendary 1940 font of Hitler lampoonery, The Great Dictator. The best part about all this though is the source material; the script is to be based on Zabibah And The King, a romance novel reportedly written by Saddam himself under the crafty pseudonym, ‘Anonymous’.

It’s generally understood within Iraq that the moustachioed Bush-baiter was the ‘brains’ behind the novel, though the CIA has been trying to dampen everyone’s delight at news of the film’s green light by claiming he had had it ghost-written, making us all wish the Agency would keep their noses out of literary and cinematic matters and stick to things they know about, like exploding cartoon cigars.

Larry Charles will direct, as he did on Bruno and Borat, and we can only hope that after this and his upcoming portrayal of Freddie Mercury, Baron Cohen completes the Big Three hat-trick by taking a stab at Hamlet some time in the near future.