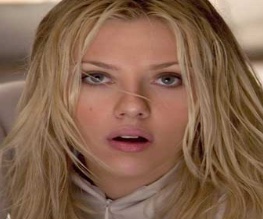 Remember when Scarlett Johansson was the moody, depressive actress who used to turn up in movies like Ghost World and Lost in Translation being all moody and depressive? Well, 2003 has never felt further away, as yesterday the final nail was driven into Scarlett Johansson’s long-lost credibility coffin. No, it’s not a sequel to He’s Just Not That Into You. Her private stash of nude photos of herself has been leaked, and she’s dead pissed about it.

We kind of thought ScarJo was smarter than this. Didn’t she go to college, or something? Most fourteen year olds have more sense than to keep naked photographs of themselves in their phone. Obviously we can’t reprint the pictures here, but chances are you’ll have googled them before finishing this article anyway. They’re a little disappointing. Honestly, you’d think one of the most photographed women in the world would have a better knowledge of what angles do and don’t work for her.

The photographs, leaked yesterday, have caused uproar at camp Johansson. The star has apparently contacted the FBI about it, as the photos were apparently hacked from her phone. While the prospect of an average pap being able to hack into your phone must be terrifying for any star, does she really need to call the F.B. flippin’ I? Don’t they sort of have… stuff to do? Terrorism stuff?

Are there nude photos of you on the internet? Why, or why not.