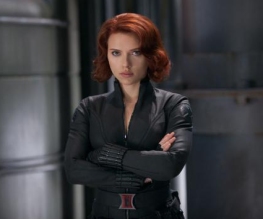 Scarlett Johansson (aka Natasha Romanoff aka Black Widow aka She Who Brought A Gun To A Superhero Fight) has signed up to return for director Shane Black’s Iron Man 3.

This announcement pits the actress, whose face you must by now know better than your own mother’s, back alongside Robert Downey Jr., Gwyneth Paltrow and Don Cheadle for the first in Marvel’s second wave of “Avengers Initiative” movies.

Following her pitifully small role in Iron Man 2 as one poor extra’s butt-double, Johansson should find herself with more to do this time around, with Black promising that his movie will be a little more than two men in masks hitting each other (expect the first hundred images shortly).

More importantly, however, this seems to indicate that the character will not perish in the forthcoming team-up – after all, ghosts can’t really strut up staircases in tightly fitted skirts. If Marvel Avengers Assemble (HAIL MARY) director Joss Whedon is to stay true to form, I wouldn’t get too attached to Jeremy Renner’s Hawkeye. Who am I kidding, thank Loki for that.

Previous: More Avengers photos!
Next: Being Elmo: A Puppeteer’s Journey