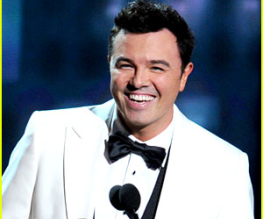 American Dad and Family Guy creator Seth MacFarlane has been announced as the host for next year’s Oscar ceremony. Still riding high from Ted‘s success, the writer and comic will join the ranks of prior Oscar hosts such as Billy Crystal, Whoopi Goldberg, Steve Martin, Billy Crystal, Hugh Jackman, Billy Crystal, Anne Hathaway and Billy Crystal. (For once we’re not exaggerating, Billy Crystal actually hosted the Oscars nine times, a feat only surpassed by Bob Hope and made more impressive when you consider the fact that Billy Crystal stopped being funny around ten years ago.)

Internet reaction to the news is surprisingly split on the issue of whether Seth MacFarlane will make for a good Oscar host, but we think he is an excellent choice. The Academy are clearly trying to attract the interest of a younger demographic and Seth Macfarlane will no doubt attract a trendier, albeit edgier audience that could help the Oscars recoup some of the viewership it has lost over the last few years.

We can only hope that this works out better for Oscar than the whole James Franco and Anne Hathaway thing. You know, that whole awkward situation where James Franco and Anne Hathaway got confused and thought they’d been given a role play exercise where James Franco had to pretend to be that one uncle that always gets too drunk at the Christmas party and staggers around making everybody feel uncomfortable while Anne Hathaway played the embarrassed Aunt who follows him around laughing nervously and going, “Oh James, you never could handle your liquor, what are you like?!” and that was going fine until they realised that actually, they weren’t in some kind of sixth form drama excercise and were in fact, HOSTING THE FREAKING OSCARS AND MAYBE A DRESS REHEARSAL OR TWO MIGHT HAVE BEEN A GOOD IDEA!!

Previous: Dawn of the Planet of the Apes secures Matt Reeves
Next: Little House on the Prairie to get film adaptation