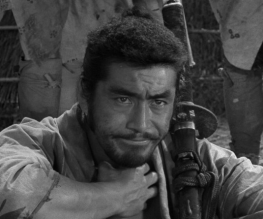 There are some timeless classics you just DON’T MESS WITH. Akira Kurosawa’s Seven Samurai is one of those films. Well actually it was remade into The Magnificent Seven in 1960 and that turned out pretty good. But not this time, I tell you! NOT THIS TIME.

Well the Weinstein Company and completely unknown director Scott Mann have decided to give it crack, taking the story of a Japanese village enlisting the help of some kind Samurai (there were seven, I believe) to ward off some bandits and giving it a modern twist. YAY! Modernity is well sick, innit.

They’ve decided to move the action to a modern day town in Northern Thailand (but there aren’t any Samurai in Thailand! I hear you cry) that recruits seven (that sounds a little more familiar) paramilitary contractors (oh) from around the world to defend it from an oncoming attack. Right then.  So no samurai, no Japan. We can only hope the film will be called Seven Paramilitary Contractors, so that we can really chuckle at the makers, who will probably wipe away their tears with filthy wads of Thai Baht….oh.

Previous: Al Pacino to Receive Glory to The Filmmaker Prize (YAY!)
Next: Film Blog of the Week: Films from the Supermassive Black Hole