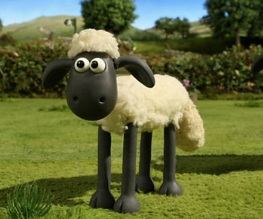 What do ewe make of this then? Aardman have confirmed that their children’s cartoon character Shaun the sheep will be getting his own movie. An hour or so of baa-ing sounds mad on paper, but it’s Aardman – they’ll pull it off. Titled Shaun The Sheep, the film will see the woolly hero and his farmyard friends head to the city to rescue their farmer after their antics land him in a lot of trouble. David Sproxton, a Very Important Man at Aardman, said: “Shaun and his friends have a massive global following and we are very excited about being able to put them into a bigger adventure for the big screen.”

Shaun is currently the star of his own CBBC series, which is shown in over 170 countires. The show features the voices of kids’ TV star Justin Fletcher and a theme tune sung by Vic Reeves (no, we didn’t know that either!) He’s come a long way since playing second-fiddle to Wallace and Gromit in the Oscar-winning A Close Shave. Given Aardman’s track record at the cinema, Shaun The Sheep will be delightfully funny, look incredible and stay completely, brilliantly British. We’ll be the first in line at the cinema when it’s out.