Shawn Levy to direct The Three Misfortunes of Geppetto 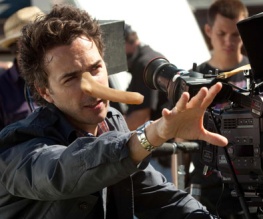 You know Shawn Levy? Shawn ‘Night at the Museum‘ Levy, soon to be renamed Shawn ‘Real Steel‘ Levy? The guy in the photo on the left? Yeah you do. Well, he’s making a Pinocchio prequel described as a Princess Bride-esque tale of the various adventures of pre-little-wooden-boy Geppetto.

Yep. Take a moment to let that sink in.

WHAT THE FUCK, WORLD? Even if there weren’t already two Hollywood projects based on Pinocchio in the works – and there are, Tim Burton’s live action remake and Guillermo del Toro’s 3D stop motion who the hell knows thing – who gives a flying fuck about Geppetto? With the possible exception of the wardrobe in Beauty and the Beast, Geppetto is positively the dullest character ever to appear in a Disney film. Can you even begin to imagine how spectacularly boring it’ll be to see a film about his crappy pre-Pinocchio life? Apparently The Three Misfortunes of Geppetto will involve a war (presumably one of the myriad conflicts associated with the Unification, unless the film’s being updated/moved out of Italy), and will concern itself with Geppetto’s quest to find his true love Julia Moon. SPOILER: she almost definitely dies at the end, or at the very least dies between the two films, because Geppetto’s bed is cold and empty by the time he carves a little wooden boy to fill it comfort him in his old age.

We just… maybe we should give up and go home. This world is a cruel and cold place.