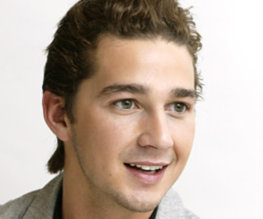 His name is Shia… and he’s been a very naughty boy! Tenuous, lame, ultimately-failed attempts at skilfully-inserting Monty Python references into news stories aside, the truth of the matter is that the charisma-deficient Transformers star was indeed arrested in the early hours of Saturday morning after allegedly being called a gay slur that happens to rhyme with ‘maggot’.

Apparently, the incident kicked off when a ‘refreshed’ LaBeouf was accosted by an autograph hunter in a Californian bar. Just trying to live his life, the actor told this uppity peasant where to go and no mistake. Later, outside the wonderfully-named Mad Dog’s Tavern, the fellow and a friend asked him for an autograph and were apparently told to get the ‘heck’ out of his way. The man then responded with said homophobic remark and Shia, manly manliness threatened, charged at the pair like a ‘rabid, drooling Sumatran rhino’, no-one is quoted as saying.

But Shia hadn’t counted on the quick wits of a nearby bouncer, who nimbly put the actor in a headlock, before handing him over to a passing policeman as his tormentors did one. It’s the third time the actor has been arrested. Throw away the key!