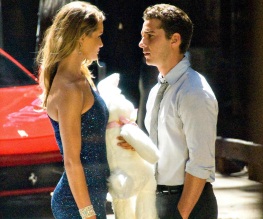 There’s a new trailer for the Transformers threequel, and it contains all the elements we love to loathe from Michael Bay’s direction. There’s big old robot car type things, a significant lack of dialogue, and no definite articles when there should be definite articles. It’s ‘THE Earth is Dark’, Michael, not ‘Earth is Dark.’ Still, that’ll be the least of your worries, with acting from such luminaries as drunkard Shia LaBeouf, and Victoria’s Secret model Rosie Huntington-Whiteley.

The trailer makes no attempt to outline even a vague plot, simply giving us half a minute of big things being smashed up, which feels about right. If you need a reminder as to the contents of the last film, look here.

Transformers: Dark of the Moon is out on the 1st of July.