The Hobbit: An Unexpected Journey gets a second trailer 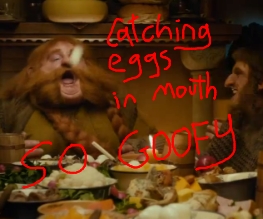 It’s approximately bloody ages since the first full trailer for The Hobbit: An Unexpected Journey – back then we even thought it would be the first of two films, not three. With less than three months to go before the first film charges into cinemas, tripping over its own battleaxe and upending a table of pastry treats, we’ve finally got a second trailer – and it’s really, really stupid.

Have a watch – make sure you’ve got your ‘ME SO WACKY’ face at the ready:

…oh god. There are some promising stirring/fighting/Gandalf scenes, but HOW MUCH of that bloody trailer was dwarves being comically stupid? Peter Jackson seems to have learnt nothing from Jar Jar Binks’ single-handed destruction of George Lucas’ credibility – if you enliven your prequel trilogy with CGI twats then the fans won’t be happy. All of a sudden we’re very, very worried…

What do you think of the new Hobbit trailer? Let us know below!

Previous: Barfi!
Next: Orange(Wednesday)s and Lemons #87