Spidey has basketball, is jerk 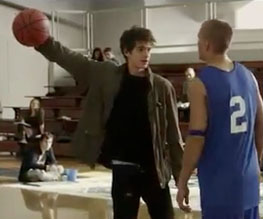 Yes this might be a news story about upcoming Spidey reboot The Amazing Spider-Man, but let’s kick things off by watching a clip from the 2002 Tobey Maguire version (below).

Innit good? Peter Parker is at his locker, minding his own business, being a nerd. Then suddenly his Spidey sense starts a-tinglin’ and before you know it a fist is trying to slam its way into his face. It’s the school bully Flash (Alcide from True Blood is that you?) and he’s bustin’ chops. Only little Peter is totally ready for him. Look at the wide-eyed wonder when he realises he can take this guy on! He’s not showing off, he’s just trying to not get the crap beaten out of him.

AND THEN THERE’S THIS SHIT (courtesy of Cinema Blend – thanks guys!):

Seriously what are we meant to think watching this? “That Peter Parker is a total jerkwad”? That is literally what we’re all thinking right now. Remember when the trailer hit and there was the whole “Small knives! My only weakness!” bit and we all suspected Peter Parker was kind of a jerkwad? Well pack up your bags non-believers because this whole basketball stealing business has confirmed it.

Now we all like Andrew Garfield but there’s just something a bit worryingly smug about him as Spider-Man. It’s probably because he’s cool in real life and dating Emma Stone whereas Tobey Maguire is obviously a huge nerd.

Aren’t there lives you should be saving, Peter? Aren’t there spiders whose natural habitats you should be preserving or something? And WHAT is that music? That is some Desperate Housewives shit right there. Where’s Bree with her muffins, Peter? DON’T STEAL ONE OF BREE’S MUFFINS AND REFUSE TO GIVE IT BACK YOU BIG BULLY. What a bully.

The Amazing Spider-Man will be throwing your rucksack in a tree from July 3rd.

Previous: Chris Hemsworth to get all wet In the Heart of the Sea
Next: Will Hugh Laurie get his evil on in Robocop?