Star Trek Into Darkness gives us another awesome clip 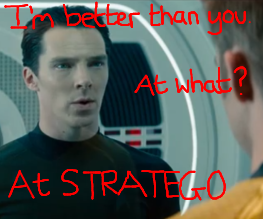 Star Trek Into Darkness is imminent, guys! Knowing that we’re salivating for what will undoubtedly be the film event of the year, the good folks at Bad Robot have given us a little clip to ratchet our anticipation levels up even further. Featuring the sublime talents of Benedict Cumberbatch as John Harrison facing off against a palpably angry Chris Pine as Kirk, we get a war of words and wills and wangs (possibly). Take a look:

Move aside The Silence of the Lambs! We now have our favourite prison interview ever, and Star Trek Into Darkness isn’t even out yet! The two actors just nail their performances don’t they? Benedict Cumberbatch is doing this fantastic “I’m exaggerating my jaw movements when I talk but the rest of my head remains perfectly still so that I look like an ill-designed android” thing. Give that man a goddamn Oscar immediately!

Star Trek Into Darkness CHANGES EVERYTHING when it hits UK cinemas on 9th May at warp factor 9.

So what? It’s just another clip of Star Trek Into Darkness. It’s just actors talking at each other. It’s not like we’ve not seen that before. ‘Scuse us while we change out of our velour pants.