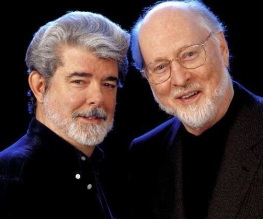 More Star Wars sort-of-news. Remember John Williams? Scored pretty much every Spielberg film, and all the Star Wars films to date. Well, apparently he’d like to rework his simple melodies into another format with the new films, according to an interview he did recently. We’ll quote verbatim:

We’re about to play Star Wars and each time we play it, I’m reminded of the first time we played it decades ago. Neither I, nor George, nor anyone else involved thought this would go far or in a few years there would be a sequel and I’d have to revisit the themes…and years later another trilogy. Now we’re hearing of a new set of movies coming in 2015, 2016…so I need to make sure I’m still ready to go in a few years for what I hope would be continued work with George.

Although J.J. Abrams generally works with long-time composer Michael Giacchino, and although George Lucas has been rightly reduced to a consulting capacity on the new films, it seems that Williams is simply assuming he’ll be asked back and ‘working with George.’ Oh no please don’t let this happen Disney, we’re going for renewal with this project right? Let’s not fossilize the Star Wars reboot before it has lived and breathed.

Sure, Williams has made lots of memorable tunes. But hasn’t the amusing (yet true) joke been going round for a while about the samey quality of his ouvre? Go and try listening to three or four of his amazingly famous scores and see whether the whole cacophony of sound lasts out your session before turning into a sort of grey gloop of compositional singularity, then come back and complain that we’re being disrespectful.

Do you want John Williams on board for the new Star Wars outings? LET US KNOW