Stills Released For Sherlock Holmes: A Game Of Shadows 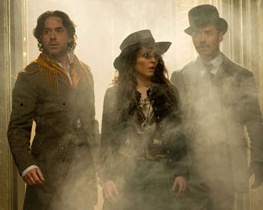 As we nudge our way ever-closer to the Sherlock Holmes: Game of Shadows release date set for this December, Team Ritchie has decided to give us a sneak preview of… well, not much, really.

We have Holmes and Watson having afternoon tea (oh, how Victorian of them) with promising new character Sim. Sim, played by the equally promising and equally new Noomi Rapace, is all action in the trailer but here appears remarkably sedate. In fact, we’re much more interested in what’s going on in the background, which appears to be some kind of silly hat convention. Otherwise, we have Holmes playing chess, because the audience needs another visual cue about how smart he is.

The stills do seem to imply that this edition of Holmes will be closer in spirit to the original Conan Doyle stories, in that there seems to be a bit more sitting around and sussing things out. As opposed to jumping off bridges and escaping slaughterhouses. What are your hopes and fears for the new Sherlock Holmes?

Previous: Christian Bale to feature in Spike Lee’s Oldboy?
Next: Ghostbusters 3 will shoot in 2012 – with or without Bill Murray