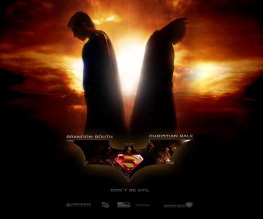 PERTINENT TO THE NEWS STORY YOU’RE ABOUT TO READ: when you type “Zack Snyder B” into the Google, the third autocomplete option is “bad director.” Poor Zack. Or poor anyone that suffered through Sucker Punch, I guess.

Anyway, the reason it’s pertinent is because he’s just dropped the bomb that the follow up to the sadly average Man of Steel is going to feature Batman. The assumption being that Supes and Batters will be teaming up to fight evil, and (if we look a little further ahead) to form the Justice League, although there are dark rumours that one of them will be more villainous than is their wont.

Rumours are all we’ll see for some time; the script’s still being written, which suits us, because it means we’re free to speculate all we like, the bounds of realistic expectation be damned.

So will Lex Luthor genetically merge with Poison Ivy and create weird, humanoid Venus fly traps? Will there be a European connection, with the crime fighting duo finding out the royal baby is actually Damien, of the Antichrist Damiens? Will their passion for the fight end in the entire world being knocked down, instead of just Gotham and Metropolis? ANYTHING COULD HAPPEN, so long as it happens in extreme slo-mo.

What do you want from a SuperBatMan crossover? Let us know below!