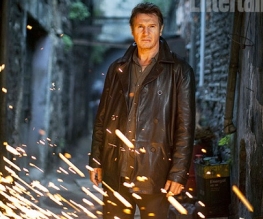 So, Taken 2 is still happening, and the new trailer continues on in the vein of fatherly ass-kicking we have come to expect from our erstwhile one-note hero. It appears to be falling to dimwit daughter Kim to do the saving this time – whether or not Liam believes this is a good idea is debatable. One gun and two grenades? That’s fewer weapons that he takes down to Tesco of a Saturday morning; clearly he bred this child to be a butterfingered idiot.

This time around, it’s old Liam and the ex-wife who get TAKEN. Amidst all of the run-of-the-mill death and destruction, we would like to predict that he’s going to hit the wife with the old chat-up line – perfected by Pitbull in recent sweaty club jams – “Yeah, I know we’re divorced, and I know I’m clearly riddled with PTSD and a paranoia disorder, and I know I have way more guns that I have hands with which to use them, BUT we might die today, baby. This might be the last chance we ever get to celebrate LIFE. LET’S MAKE SOME.” Bear in mind, Bond’s spending most of Skyfall in Istanbul too, and Famke Janssen played Xenia Onatopp in 1995’s Goldeneye; this is a love triangle gagging to happen.

Previous: Gangster Squad reshoots in the wake of Aurora massacre
Next: True Blood star signs on for Lee Daniels’ The Butler