The Great Gatsby postpones the party 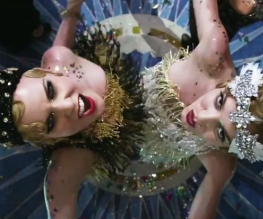 You would have thought that Christmas Day was as lucrative a day as any to be releasing one of the most anticipated movies of the year, but the powers that be at Warner Bros. have decreed that The Great Gatsby needs to be a 2013 Summer Blockbuster instead. They’ve gabbled about wanting to reach “the largest audience possible..so that moviegoers of all ages can embrace it”, but we imagine the real reason is “money”, and the fact that lead Leonardo Di Caprio’s other dead cert smash hit Django Unchained is coming out on Christmas Day as well.

The adaptation of F. Scott Fitzgerald’s beautiful novel is set in decadent 20s New York, and inexplicably features the music of rappers Jay-Z and Kayne West. And it’s in 3D. And it looks very Moulin Rouge. And Carey Mulligan’s Daisy Buchanan and we just don’t know if she’s going to be good enough. And Tobey Maguire’s in it. But we’re prepared to give ol’ Baz Luhrmann the benefit of the doubt – Hurry Up next year.