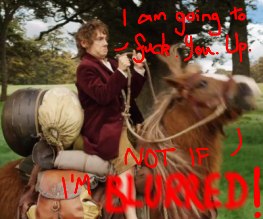 With less than a month to go until its release, cursed production The Hobbit: An Unexpected Journey has run into yet another snag – a slew of animal wranglers who worked on the film have come forward to claim that the idyllic New Zealand set of The Hobbit was in fact a hellish labyrinth of traps and perils virtually designed to cause the slow, miserable deaths of the entire non-human cast (excluding hobbits, dwarves, elves, orcs, Great Eagles, dragons, trolls, giant spiders, Istari and Balrogs, who can look after themselves).

According to the Daily Mail, which definitely never lies or publishes false testimonies under any circumstances, a pony called Rainbow had been cast in The Hobbit but permanently missed out on the limelight after it ran “off a bank at speed and crash-landed”. We hate to split hairs (or backs), Rainbow, but that sounds like a clear case of ‘stupid horse didn’t look where it was going’ to us. Another horse, this one called Zeppelin for some reason, was found dead with its head in a stream – the attending vet said it died of a burst blood vessel, but one of the snitching wranglers claimed it was “bloated and its intestines were full of a yellow liquid”. Have you not heard of Foster’s, wrangler man? Zeppelin was clearly going hard in the authentic Antipodean style and dozed off while he was trying to sober up with a lovely drink of water.

In other news, two other horses called Molly and Doofus cut their legs open while trying to operate barbecue implements (probably) – they didn’t die, they just felt silly because their names are ridiculous. A variety of goats and sheep also died from falling in holes (hey, if it was good enough for the Emperor…) and some chickens got eaten by dogs, which is what happens if you keep chickens and dogs in the same country. Jesus Christ, people. 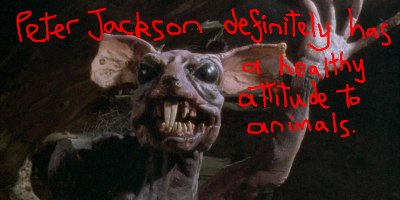 Peter Jackson and the other producers of The Hobbit have released a statement categorically denying the claims that 27 animals died during production and living conditions were consistently unsafe, but we’re not even going to reproduce it because we completely believe him. More than half the shots of animals were computer generated ANYWAY, and the bloody American Humane Association was onset faffing about and making sure nobody spoke sharply to a goose or whatever constitutes animal cruelty these days. And, just in case you were in any doubt at all that Peter Jackson was a good sort, he personally adopted three of the pigs used in the film – just like when Viggo Mortensen bought the horse that played Brego in The Lord of the Rings. We heard Viggo eats breakfast with that horse every day – he’s such a doll.

In conclusion, you’re the sort of person who reads news stories about The Hobbit on a Tuesday morning; you’re clearly at a desk or in bed or somewhere that more or less precludes you being a working farmer. You’d much rather see The Hobbit and accept that a few animals might have died to make it happen than miss out on the fantasy film of the year but know Rainbow was living out his retirement with Hooch and the monkey from Ace Ventura in a quiet gated community somewhere outside Los Angeles. Honestly, who gives a sugarlump?

Do you really, really care about horses dying horribly on the set of The Hobbit? Oh, you do? Whoops.

Previous: Almodóvar to try his hand at sci-fi
Next: Amazing Spider-Man 2 puts feelers out for Harry Osborn