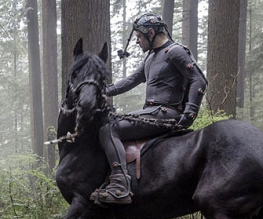 The Planet of the Apes has had as many weird little reboots as there are hairs on a chimp, and not all of them have been well-received by critics or the public. Rise Of The Planet Of The Apes in 2011 was arguably rather good, even if it was uneven. The sequel, Dawn of the Planet of the Apes is currently being filmed under the directorship of Matt Reeves, who tweeted a photo from the set of the film – it’s our first look-in on the chimp-a-thon.

Let’s take a look at a bunch of pre-CGI’d chimps in a forest, shall we? It’ll brighten up your Monday like nothing else. 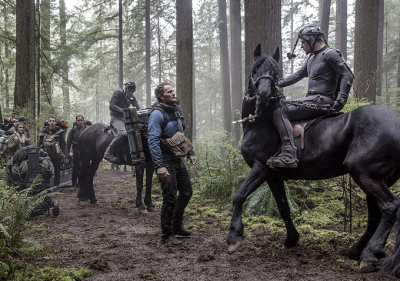 Isn’t just brilliant? That’s Andy Serkis up on the horse, reprising his role as the ape-Jesus Caesar, in full mo-cap gear. We feel sort of bad for him, he’s such a talented actor that he deserves to step out from behind the CGI more often. Ah well, we’re just glad to have him back as the savior of chimp-kind.

Featuring Andy Serkis, Gary Oldman (SCORE) and Keri Russell, Dawn of the Planet of the Apes will continue to dominate mankind in 2014.

If someone doesn’t scream “Take your stinking paws off of me, you damn dirty ape!” in Dawn of the Planet of the Apes, we’ll be upset.

Previous: Man of Steel gets yet another TV spot
Next: Timothy Olyphant to be The Man on Carrion Road