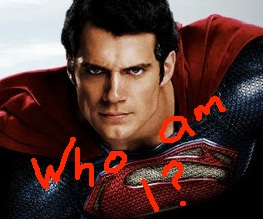 Man of Steel TV spot the fourth has arrived, and is continuing the hit the “ooh, different! Different from people!” aspect of ol’ Supes’ existence.

Previously we’ve heard the voices of fathers both human (Kevin Costner) and alien (Russell Crowe) giving their son their views; the former believing he’ll freak everyone out, the later that he’ll give people something to aspire to. “Look! That guy can stop bullets, maybe I should give it a try!”

The new Man of Steel spot opens with Laurence Fishburne’s smooth tones as Perry White, wondering about the reactions of people “if they knew there was someone like this out there,” while Superman floats above a bunch of soldiers running around with their guns going “Argh! An Alien! ARGH.”

With a score that sounds remarkably like the one from Pirates of the Caribbean, lots of explosions, and the question “why would you fight for people who don’t understand you?” hanging everywhere, it certainly seems to be trying hard to match the Dark Knight trilogy in tone. Out here in June, we’ll all be excited to see whether Man of Steel manages to make Superman a less boring hero.

If you were at school with Clark Kent, would you have bullied him? We would have.

Previous: S.H.I.E.L.D. TV promo now up, Coulson LIVES
Next: The Planet of the Apes sees new dawn with Andy Serkis