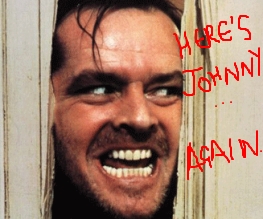 Yeah, we don’t think we’re okay with this either. Warner Bros is apparently “exploring the possibility” (read: locking up a nerd with a calculator and a pencil to see if it’ll make enough money) of making a prequel to the iconic Stanley Kubrick adaptation of Stephen King’s novel The Shining. Freaking people the fuck out since 1980, The Shining was written as a standalone novel; any prequel would have to be crafted from nothing more than thin air, strong coffee and furious intellectual-wanking over Jack Nicholson – which we would ordinarily wholly support.

It’s not even that prequels cannot or have not been done well in recent years; Rise of the Planet of the Apes was hugely better than it was meant to be. That said, there’s really only so far you can go wrong when you’ve got Caesar on the case – smart monkeys terrify the pants off zoogoers everywhere in a way that’s really rather watchable, and everyone likes when stuff blows up. A bloody treatment of the Overlook Hotel’s past combined with ham-fisted attempts to answer questions left open by the original sounds even less fun than getting stabbed by Jack Torrance.

With the Carrie remake looming, we suppose we should at least be thankful they’re not trying to remake it altogether; however we are demanding and spoilt and only want nice things that we don’t have to ask for, not shit things we were never going to ask for.

Cross your fingers no one wants to write the script?

Do you fancy a Shining sequel? Let us know in the comments!