There might be a Flight of the Conchords movie 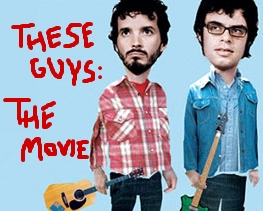 Everyone is naturally excited by the news, even though at the moment the project doesn’t really exist and there is a possibility that it might never exist. We hope it does, though, as fans of New Zealand and students in ironic knitwear long for, nay, demand that it exist.

Plus, the two masterminds are in a better position to do so than ever before, each having proved their cinematic worth individually: Jemaine Clement has been lending his talents to a variety of comedy films (including Rio, Despicable Me, and soon Men In Black III), while Bret has been working as a writer on The Muppets* (including several of the songs) and will be taking the role of Lindir in The Hobbit. Be excited.

*In case you forgot, we LOVE The Muppets