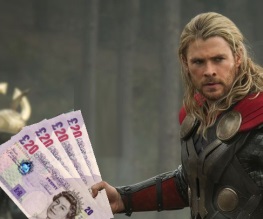 Riding on the endless wave of Marvel popularity that crested with Marvel Avengers Assemble, Thor: The Dark World has inexplicably managed to take $105m over the weekend despite being absolutely rubbish. Incredibly, this is before it’s opened in any of the three countries – China, Japan and the US – that wield the biggest box office clout, suggesting that the latest adventures of the beardy Asgardian and co could easily be headed for a half-billion dollar gross once the big markets kick in.

It’s beginning to look as if no Marvel film can ever be anything but a colossal financial success. Avengers Assemble and Iron Man 3, the two most successful Marvel films to date, occupy third and fifth place on the leaderboard of highest grossing films ever, and although Thor: The Dark World may not make it that high – Iron Man 3 beat The Dark World‘s opening weekend by $90m earlier this year, with the same countries missing from its take – it’s reasonable to assume that Disney’s looking at another Hulk-sized payday. Lucky, lucky Disney.

Did you contribute to Thor: The Dark World‘s ridiculous gross? Shame on you.

Previous: Blue Is the Warmest Colour
Next: Star Trek 3 could beam up Joe Cornish