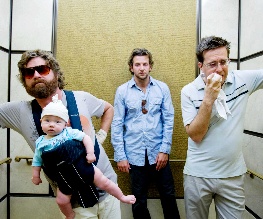 Director Todd Philips has been flapping his gums about the much awaited sequel to 2009’s The Hangover, and according to the big man, this isn’t going to be just another money spinner.

“I’m not delusional,” he says “I know what I’m up against. I saw Meet The Fockers. But we’re aiming high. It’s called The Hangover Part Two, you know.”

We know. In the sequel to the alcohol-soaked Vegas comedy, Zach Galifianakis, Bradley Cooper and Ed Helms are back, and this time they’re headed to Bangkok and LA for more boozey mayhem. In Phillip’s own words, “There’s gonna be some f*cked-up surprises.” We wouldn’t expect anything less. And if you just can’t wait to stuff yourself with some Todd Phillips comedy, fear not! His latest film Due Date is out here next month, and it stars our not-so-secret love crush Robert Downey Jr. See you there.