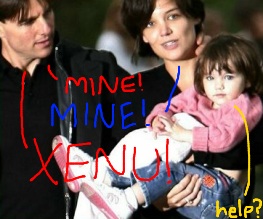 You can hardly have missed this weekend’s biggest showbiz story – just a few weeks after Vanessa Paradis left Johnny Depp over his uncontrollable hat collection and inability to accept that he is nearly fifty, Katie Holmes is finally escaping from the insane, twisted Richard Scarry-esque world of her Bonsai cultist husband Tom Cruise.

BUT! The pint-sized sofa-jumping maniac has filed his own divorce claim in an effort to ensure that the Thetans affecting his wife’s behaviour aren’t able to take his daughter Suri away from him before David Miscavige has supped of the sweet dark fountain of her menarche. That’s… that’s what we’ve heard, anyway.

Understandably keen to wrest Suri away from Cruise altogether before she becomes a blank-eyed, chanting Hubbardiste drone, Katie Holmes has filed for divorce (and sole custody of her daughter) in New York state. Sole custody is a much more realistic prospect in NY than in hippy-dippy think-of-the-children California, where Katie and Tom usually live (although they maintain a NYC home). With this presumably in mind, Cruise has counter filed for divorce in Los Angeles and will be fighting for joint custody.

Cruise has quite a strong case – although Holmes has made a point of being photographed in New York every day for the past couple of weeks, she has certainly not been physically resident there for the last year as the law requires. As an Interstellar Archbishop, Cruise can also call upon the massed psychic powers of his army of lobotomised minions to influence the judge – and if things get really tough he can use his position as Keeper of the Dread Sceptre of XytRuuzyxh to summon the spirit of L. Ron Hubbard to possess his body and flood the courtroom with cosmic fire. So that’s good.

Which is your favourite evil Scientology scheme? Ours is Operation Snow White.