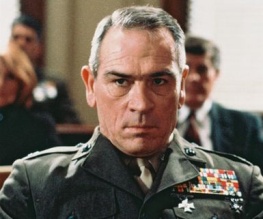 Fresh from playing a brilliantly grouchy US Army Colonel in Captain America: The First Avenger, Tommy Lee Jones has been bumped right up to General to portray legendary war hero Douglas MacArthur.

Forthcoming historical drama The Emperor, which will also star Lost stalwart Matthew Fox, will tell the story of the trial of Emperor Hirohito following the end of the Second World War. Fox will play MacArthur’s protégé Bonner Fellers, a leading expert on Japan who is charged with deciding whether Hirohito qualifies as a war criminal and must therefore be hanged. There’ll also be a crudely transplanted romance, because God knows how else anyone’ll get their birds to watch it. Right, guys? Right? Sigh.

Peter Webber (The Girl With the Pearl Earring) will direct, whilst David Klass and Vera Blasi are turning the true-ish story into a screenplay.

We’d love to tell you more about MacArthur and Fellers (we have a vague recollection from GCSE History that MacArthur wanted to nuke China during the Korean War, although that might have been someone else) but we can’t because Wikipedia’s down. If you’re reading, US legislative dudes, don’t pass SOPA and PIPA! It really is rather hard to pretend to be knowledgeable about things when the biggest and most accessible encyclopedia in human history is suddenly unavailable.

Do you know anything about Douglas MacArthur? Do you, perhaps, have an actual tangible encyclopedia? For god’s sake tell us something informative below, we’re really at a loss.