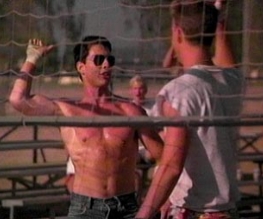 Top Gun. The 1980s film that inspired males all over the world to have a wingman. It sounds like a good plan – you bring along your mate to chat to the less attractive friend of the girl you are trying to score with, but I’ve heard of disasters. Boys, you’re better off just winging it.

Or just look for more high-flying tips in the Top Gun sequel from the master himself because Maverick is set to be making an appearance. Oscar winning screenwriter Christopher McQuarrie (Valkyrie) is said to be working on the project and has found a way to include Tom Cruise’s character (didn’t he say he would never be Maverick again?), as long as the role “isn’t too obvious”. Hmm, so we won’t be expecting anymore topless volleyball games then?

Paramount are eager to get the project up and running and with producer Jerry Bruckheimer and director Tony Scott involved, the sky is the limit. And whilst nothing is set in stone, I just can’t stop my brain from thinking TOP GUN. I’m hoping for a lads-on-tour-danger-zone kinda thing. With a little bit of homoeroticism sprinkled over the top for good measure.

I hope they hurry up and make it. I feel the need. The need, for speed.

Previous: Will Alec Baldwin join MiB 3?
Next: Rhys Ifans as The Lizard in Spider-Man reboot?