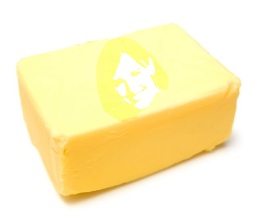 Do you like butter? Then you may want to look away now. Because you’re about to see so goddamn much of it you’ll probably start to question that delicious melty bagel you’re holding in your non-typing hand right now. That’s right, folks. They’ve made a film about Butter and it stars Jennifer Garner and Olivia Wilde and there’s a whole lot of butter in it.

The film, by Jim Field Smith, is about a bright-eyed young adopted girl who discovers she has a knack for carving butter and ends up going head to head with a politically ambitious local woman (Garner) in one of those butter carving competitions you’re always hearing about. In the mix are the girl’s parents, Rob Corddry and Alicia Silverstone, alongside Garner’s hubby Ty Burrell and the stripper he becomes involved with, Olivia Wilde.

We’re not quite sure what to make of this. The fact, for instance, that lines like “I get pregnant, like, once a month” made it into the trailer does not fill us with confidence. And though there is a great deal of satire inherent in the central concept, we’re almost 100% certain this film will end with some sort of uplifting tosh involving the little girl with all the talent. Maybe we’re being too cynical but GODDAMNIT IT you’ve put us all off our bagels, Butter trailer! We’re not sure we can forgive you for that.

Previous: New poster and featurette for Looper
Next: “Girls” actor to star with Wasikowska in film about camels