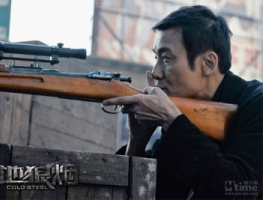 David Wu is brilliant. You remember all the classic, old-school John Woo films? You know: Hard Boiled; Red Cliff; all the films that finally proved to the world, after decades of beautifully choreographed martial arts, that gun violence can be just as beautiful as regular violence. Well, that was formed through the holy alliance of Woo and Wu as Director and Editor.

Since the Woo-Wu days our boy David’s been keeping himself busy with TV, but now, after nigh-on two decades away from the big screen, he’s only gone and directed an action movie. And it looks AWESOME!

It’s called Cold Steel, it’s a period piece set in the Second World War, and it’s a sniper movie. Think Enemy at the Gates, except with explosions and motorcycle chases and jumping through windows and sliding down buildings on drapery firing wildly! Oh, and it has Tony Leung in, and he’s a BAMF.

The trailer doesn’t have English subtitles yet, but you need to watch the shit out of it anyway, because the only language it needs is the language of steel. And they’re sure as hell not going to warm it for you.

What do you think of the trailer? Why do you love Tony Leung? How do you feel about the fact we have a rifle trained on you head from an adjacent building? Let us know in the comments!