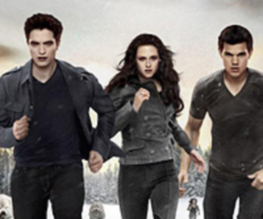 We’ve been made to write about this because apparently Twilight (ugh) is still a thing and regrettably some of the misguided members of our viewership will find this interesting. As we are writing about this completely against our will you’re going to have to excuse us from our usual standpoint of neutrality and deal with the fact that occasionally, when we mention the word Twilight, (ugh) a succinct exclamation of disgust ‘ugh’ will usually follow it. It’s not our fault, we genuinely can’t control it. Think of it like a tic or an uncontrollable affliction that we haven’t had the opportunity to get diagnosed. 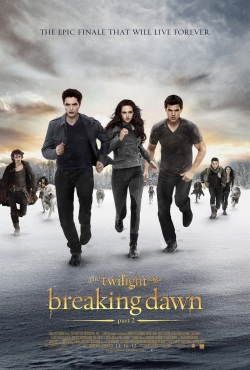 The poster for the The Twilight Saga:Breaking Dawn – Part 2 has been released and it looks..ok..we guess? You can’t really go wrong with a bunch of vaguely good looking teenagers running from wolves can you? Robert Pattinson, Kristen Stewart and Taylor Lautner all look suitably dramatic we suppose. Kristen Stewart is wearing a nice fetching pair of leggings. Taylor Lautner is looking very tan. That is pretty much our propensity for saying anything positive about this poster exhausted.

The poster for the latest in the Twilight (ugh) series has been released with the tagline, “An epic finale that will live forever.” Not only is this a lame tagline but it’s also a load of old cobblers. This is (thankfully) the last film that will be made of this series, which means we can finally put this whole mess of glittery vegan vampires and weird werewolves who fall in love with babies to rest.

Previous: We Need To Talk About Lynne
Next: The Lone Ranger trailer released