Vin Diesel drops some boring photos of Fast and Furious 6 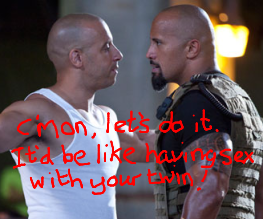 Vin Diesel has graced his Facebook followers with a couple of high-octane action shots from Fast and Furious 6. They involve Vin Diesel at a picnic and in traffic. Brilliant. Still, check out those guns! They’re certainly not at the level of The Rock, but Vin Diesel is trying, dammit! These sneak-previews are definitely making us excited for the May 2013 release of FF6 (not the computer game).

The original film that started the massively-earning franchise was The Fast And The Furious waaay back in 2001. It’s rather nice to see the three musketeers of the series (Diesel, Brewster, Walker) still knocking around, driving cars and being continuingly sexy after all this time. Lookit! Vin Diesel! He’s sitting down! Jordana Brewster is standing and looks cross!

It’s all too much! 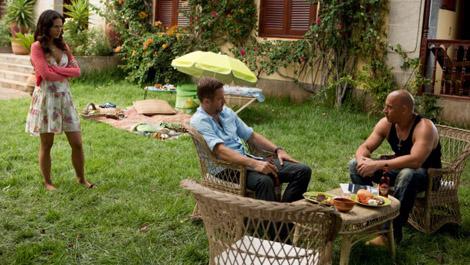 Now Vin Diesel is in a car! There are hookers or something in the background! The car’s not even in gear! EXCITING! 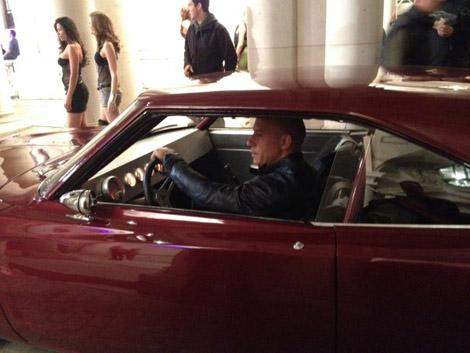 Dwayne ‘The Rock’ Johnson is set to return in Fast and Furious 6. If you remember, Vin Diesel jumped the shark in Fast Five when he beat up The People’s Hulk in one of the most egregious and physics-defying scenes ever filmed. The NERVE OF IT ALL! No mortal can best The Rock! Otherwise, Fast Five was rather decent, despite the film’s title doing away with the definite article, the conjunction and the adjective from the franchise name. Murders! Grammar bigots!

Along with Vin Diesel and Jordana Brewster, expect to see Luke Evans being bad, Michelle Rodriguez being angry and Paul Walker being… around. Fast Five director Justin Lin is also set to return, so it looks like they are playing it reeeal safe for Fast and Furious 6.

Broom BROOM BROOOOOOMMMM! What has Vin Diesel done to his career? He was such a promising lad…