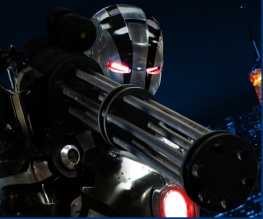 Throw a stone anywhere in Hollywood and you’re likely to hit a minimum of ten comic book adaptations. Studios have been snaffling up ownership rights to comics since the days of X-Men success and the latest news is that “War Machine”, super duper sidekick to “Iron Man”, is set to get in on the action as well.

That’s the way it looks at least according to the smoke signals coming out of Marvel Studios. Having already confirmed a further instalment to the highly successful Iron Man franchise (Iron Man 3), and with Captain America and Thor pending their 2011 release, it comes as no surprise really that Marvel would want to invest in a further series. Official announcement is still pending a workable script but it seems likely that Don Cheadle will reprise his role as Colonel James ‘Rhodey’ Rhodes in the near future, this time as the leading man.

Previous: The Rubik’s Cube Is Ready For Its Close Up
Next: First Image From Harry Potter and the Woman In Black