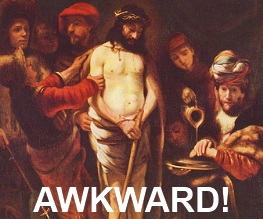 Warner Bros have obviously noticed that Bible blockbusters are in vogue at the moment, as the studio have bagged the rights to a script all about one of the more controversial figures of the New Testament, Pontius Pilate.

Just as an FYI, Pilate is pronounced like “pilot”, as opposed to the yoga-like exercise technique.

So who IS Pontius Pilate then? For those of you who didn’t pay attention in Sunday School, the Roman statesman apparently played a pretty big role in the fate of Jesus. After attempting to persuade the crowds to let Christ off for his crimes and, you know, NOT sentence him to crucifixion, Pilate found himself working against a mob baying for blood.

“And Pilate seeing that he prevailed nothing, but that rather a tumult was made; taking water washed his hands before the people, saying: I am innocent of the blood of this just man; look you to it.”

Yup, he washed his hands of the whole thing. Smart move there Pilate; that wrath of God stuff is never fun, after all…

The script, penned by Vera Blasi, doesn’t just focus on Pilate’s famed Biblical encounter with jesus, however; it intends to chart his life as a ferocious soldier who finds himself destined for a life in political servitude under Emperor Tiberius. Of course, somewhere in between gunning for a posting in Egypt and sharpening his sword, Pontius finds himself the prefect of Judea… and on a one-track route to the whole washing-the-hands business.

In a bid to top all the other Biblical epics out there, Warner have ensured they’ve got plenty of Good Book fodder on offer; Caligula, Salome (oh she who made men lose their heads!), Mary Magdaleneand John The Baptist are all set to appear as well. It’s nice to get the whole family together, isn’t it?

We wonder who they have pegged to take on the main role? We hope it’s Bruce Willis – that’d be frikkin’ awesome.

Previous: Remembering Tony Scott: His top 10 films
Next: The Inbetweeners Movie gets a sequel