We Bought A Zoo exists as a film 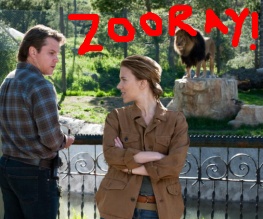 So apparently there are endless films and endless trailers today. The big news is Cameron Crowe’s been busy, guys! And he’s made a film called We Bought A Zoo, presumably about a group of people who purchased, at some point in the past, a building containing a variety of exotic animals. A zoo, if you will. The film stars Matt Damon, Scarlett Johansson, Thomas Haden Church and Elle Fanning. The trailer is below.

If you can’t be bothered to watch this trailer then let us help you out. It starts with Matt Damon struggling as a handsome dad for no particular reason. Then he quits his job and goes to look at a new house which turns out to be a zoo. What? How do you go and see a house without knowing it’s a zoo? What? Then the Sigur Ros kicks in and ScarJo comes out in a woollen jumper to indicate that she’s a good sort. Thomas Haden Church also says weird things like “Stop before the zebras get involved” and “I like the animals. But I LOVE the humans.” What? Who is he playing? Why has he got a thing about zebras?

Here’s a photo of Matt Damon with an unnamed costar (it’s a tiger): The film is out next spring.

Previous: The Big Year trailer has landed!
Next: Nobody wants to see The Human Centipede 2