Will Marion Cotillard play Talia al Ghul after all? 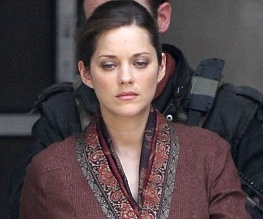 Right. We were just having a half-hearted look at some new photos of Anne Hathaway on the set of The Dark Knight Rises (in a very boring Selina Kyle get-up, nothing to get excited/bitchy over), when we spotted a shot of Marion Cotillard in costume. And it’s… blimey, it’s very bloody interesting indeed.

You may remember that Cotillard’s character Miranda Tate was described as “a Wayne Industries board member eager to help a still-grieving Bruce Wayne resume his father’s philanthropic endeavors for Gotham”, on top of which Cotillard herself has recently claimed her role is “small”. This is bollocks. We’re wise to you, Christopher, and we’ve got a new theory… (click the image to biggify)

Right, we’re going to come out and say it: Marion Cotillard is CLEARLY Talia al Ghul. What sort of businesswoman wears a tunic and three belts? Lest we forget, the Wayne Enterprises boardroom looks like this: Exactly. Josh Pence and Joey King have been cast as the young Ra’s and Talia al Ghul – meaning that unless we’re in for an extended trip to the Department of Flashback there must also be grown up versions in the cast – and the recent spotting of what look like greenscreened Lazarus Pits at The Dark Knight Rises‘ Indian set clearly corroborates our theory (from way back when Liam Neeson was first spotted onset again) that he’ll be taking a restorative dip and returning to the fray. It doesn’t make any sense for Cotillard to be fobbed off with an anodyne secondary character, and as far as we’re concerned this photo has confirmed what we’ve suspected for some time. Yay Talia!

What do you think? We’re right, obviously, but input’s always fun.

Previous: Richard Ayoade and Jesse Eisenberg team up for The Double
Next: The Amazing Spider-Man 2 gets a release date