Woman In Black Gets A Sequel 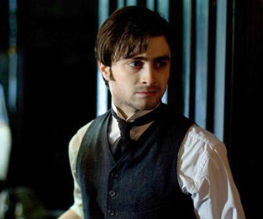 So this has thrown us into a quandary; we’re usually dead set-against money-grabbing and unnecessary sequels, but the idea of a Woman In Black 2 is surprisingly appealing.

The original flick, starring a worried-looking Daniel Radcliffe, has done amazingly well at the cinemas; $112 million worldwide to date so far, anyone? Exactly. The horror genre is a big business and, thanks to the fantastic script and that kid from Harry Potter in the title role, the film drew in trembling audiences like moths to a flame.

So how will Hammer’s planned sequel to the Edwardian chiller fare ver live up to its predecessor?

Well, firstly, with a catchy title; how does The Woman In Black: Angels Of Death sit with you all? The name conjures up so many questions all on its own; ANGELS of Death? As in, plural? LOTS OF SPOOKY WOMEN IN BLACK?! MANY DEAD CHILDREN COMING BACK FROM THE GRAVE?! MURDERERS?! Something bad, and lots of it, is always the best way to outdo the original.

The writers have revealed that the setting, Eel Marsh House, will remain the same, but that the time period will be rooted some forty years after the original. We’re guessing that’s farewell to Edwardian garb and a big hello to World War 2. Nothing says spooky like a haunted house in the midst of The Blitz, after all.

The story is, obviously, still very much in the draft stage but is rumoured to focus on a couple moving into Eel Marsh House. Into it. As in, they’re literally going to take all their stuff into that scary-as-hell setting and attempt to life their day-to-day lives out there. We have a feeling that those Angels Of Death ain’t gonna be standing for that sort of optimistic idiocy; cue spectral goings on, some suicidal children down in the nearby town (probably) and plenty of surprise crow incidents.

The folks at Hammer are promising, hand on heart, that this will be every single bit as chilling as the original film:

“It’s a wonderful new tale every bit as atmospheric and terrifying as its predecessor. We’re proud to be working with Susan Hill again.”

Will you be going to see Woman In Black: Angels Of Death when it hits cinemas?