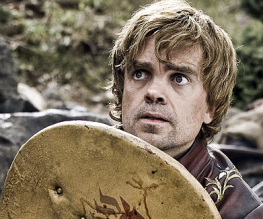 What an unbelievable Valentine’s gift for you all. It’s unconfirmed as of yet what part Peter Dinklage will be playing, but suffice to say he could play a tree and he’d be the greatest tree ever. Bryan Singer recently Twitter-announced the return of Anna Paquin, Ellen Page and Shawn Ashmore (Rogue, Shadowcat and Iceman!) to the X-Men franchise, which does wonderful things to our imaginations as we await news of a plot.

Singer also delighted X-Men fans when he confirmed that Sir Ian McKellen and Sir Patrick Stewart will be returning to the franchise, as well as Hugh Jackman‘s Wolverine, James McAvoy, Oscar-nominated Jennifer Lawrence and Michael Fassbender. What a wrap party that’ll be. Oh and Nicholas Hoult, but who actually cares about him.

Even more recently, it looks as if Hugh Jackman will be playing a larger role than first suspected, which caused us lovely folks at BFF to do some Dinklage role speculation. A member of the Alpha Flight team in the Marvel Universe, powerfully strong (like, compressed rubber strong) Puck (a.k.a. Eugene Judd) stands just under 4 feet tall (originally renowned for his height, but after an Earth-bound spirit began stealing parts of Puck’s life force he shrunk) and is involved in the back story with Wolverine. Alpha Flight may look pretty crap but Puck’s story is rather interesting. We bet you Puck = Peter Dinklage. We’re putting money on it.

More news on Peter Dinklage’s X-Men appearance as and when we get it! Who else you gonna throw at us, Bryan?!

PUMPED? We are. Who else do you think would make a great addition to the X-Men cast?

Previous: Orange(Wednesday)s and Lemons #101
Next: Hugh Laurie to join George Clooney in Tomorrowland