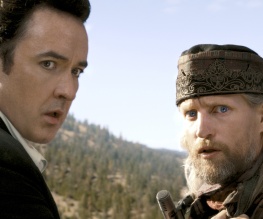 Regular visitors to BestForFilm (Hi Mum! Can we have Golden Drummers for tea?) will know that we’re a little bit sceptical when it comes to films that rely primarily on CGI effects to impress. Add to that we’re not exactly smitten with the oeuvre of serial planet-abuser Roland Emmerich (seriously, the guy’s destroyed the planet so many times he makes Galactus looks like a sulky toddler in a sand pit) and 2012 isn’t exactly the kind of film we usually look forward to.

And, it seems, very little else. Get the slackest of slack-jaws ready and prepare to breathe through your mouth for 160 minutes of dreck. Such is the paucity of ideas, intelligence and execution in 2012 that if it had any less going for it it’d cease to exist. The “script” – if it can even be called that – is merely a series of by-the-numbers “family tension” scenes that serve to link together one destruction set piece after another. Combine that with a bland performance from all involved and Emmerich might as well have shelved the cast and linked all the CGI apocalypse porn with hand-written captions.

There are far better films than 2012 out there – that goes without saying. What is worth saying, however, is that there’s far better big-budget disaster films out there, and even (and we don’t say this very often) better Roland Emmerich films out there. And that kind of pronouncement from us really does mean the world is ending.