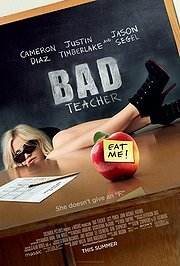 Elizabeth Halsey (Cameron Diaz) has it sorted. With a wealthy fiancé waiting in the wings and a life of freedom apparently ahead of her, Halsey quits her day job as a teacher and heads back to her meal-ticket. When her fiancé is talked into leaving her by his savy mother, however, Halsey is left with little choice but to return to the job she despised and the children she previously neglected. Ignoring the advancements of lowly gym teacher Russell Gettis (Jason Segel) in order to seduce the heir to a watch-making empire currently moonlighting as a substitute teacher Scott Delacorte (Justin Timberlake) Halsey soon finds herself butting horns with rival teacher, Amy Squirrell (Lucy Punch).

Much has been made of the similarities between Bad Teacher and curmudgeonly classic Bad Santa. To me, however, any such comparisons end swiftly with the titular prefix. Where the latter was subversive, witty and oddly charming, Bad Teacher is a one dimensional, derivative and woefully crass exercise in Bad Filmmaking. Cameron Diaz, rather than undercutting her mean streak with a internal logic which at least lends credence to her character, merely approaches the role with a vile self-righteousness that robs the performance of any nuance and relatability, putting her inevitable redemption – if she even develops that far – about 90 minutes too late.

Each character – with the exception of perhaps Jason Segel, playing himself – suffers from the film’s utter lack of dimensionality. Playing a series of quirks rather than something approaching a human being, each caricature quickly wears thin as they echo the same tired gags, each worth a knowing smile but about as resiliently hilarious as the that comic classic, “I Know A Song That Will Get On Your Nerves”. Diaz simply does not carry the movie as the abrasive Elizabeth, her character’s abhorrentness more pathetic and annoying than well observed and charming. The most frustrating thing about Bad Teacher, however, are the glimmers of hope within the dross. Although painfully infrequent, there are a number of moments – a pant-wetting sex scene and the odd hint of chemistry between Diaz and Segel – that threaten to work, quite despite the fact that the movie feels jarringly immature even for its own 15 rating. There is scope for a good movie here, with a number of potential gags ignored or fumbled in an unfortunate drive to be crass instead of clever. Halsey is a bad teacher because she makes her pupils watch TV instead of read books, because she dresses inappropriately at the sponsored car wash and because she plans her next boob-job when she should be marking papers. Inspired.

Bad Teacher, then, is a bad movie. Not without its redeeming features, it is nevertheless a joyless comedy with little more to say than a few worn swear words. While Diaz might succeed in being as unlikeable as possible, the result is not a classroom set repeat of Bad Santa but a desperate hope that school might be out forever.