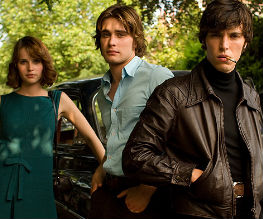 In the nine years since The Office first appeared on out TV screens, way back in 2001, Ricky Gervais and Stephen Merchant have become household names and international superstars. The Office has spawned numerous foreign versions (The American version is currently on its sixth season) and their follow-up sitcom Extras went on to be just as successful. That’s not to mention all the radio shows, podcasts and stand-up shows the pair have done between them. So it’s safe to say there’s a fair old expectation surrounding Cemetery Junction, Gervais and Merchant’s first feature film. But is it any good?

A coming of age story

Cemetery Junction is a coming of age story and, like all coming of age films, it has a young protagonist eager to make his way in the world and escape his drab surroundings. Our protagonist is Freddie (Christian Cooke) and his drab surrounding is 1970’s Reading. Except it’s not so drab after all. In fact it would be no stretch of the imagination to suggest that this is the most glamorous depiction of Reading in the history of… well, Reading.

This rose-tinted 1970’s backdrop is one of the film’s main problems. The story is meant to be about Freddie and his friends trying to escape their dull world, but the Reading in this film doesn’t look like anything anyone would want to escape – it’s just too nice and shiny. The main characters look more like models than real people and, even though the young cast do a decent job, their characters just don’t feel that fully realised – more like stereotypes than real people. The three main characters, Freddie, Bruce (Tom Hughes) and Snork (Jack Doolan) are your typical nice-guy everyman, angry young rebel and clown, respectively, and their personalities don’t have much more to them than that.

The humour is another area where the film feels a bit flat. This being a comedy from the creators of The Office, you’d expect lots of big laughs, but there’s few to be found, unless you’re a fan of constant “ironic” racist and homophobic slurs and twenty-something boys farting in each other’s faces. That’s not to say the film is completely devoid of humour. Gervais and Julia Davis put in a great performance as Freddie’s bickering parents and there’s a great cameo from Stephen Merchant, but it never reaches the comedy highs of The Office, or even Extras.

All in all this is an average film. Average humour, average characters, average plot. It’s helped along by some great performances (Ralph Fiennes as Freddie’s boss is one that particularly stands out) and the love story at its heart is pleasant enough – even if it does feel very similar to the Tim and Dawn subplot from The Office. This isn’t the masterpiece fans of Gervais and Merchant might have hoped for, but it’s not a disaster either, and gives hope that one day they’ll be able to successfully transfer the comedy magic they managed to create on television onto the big screen.

Did you enjoy this new Ricky Gervais comedy? Or should he and Merchant stick to the small screen? Let us know below!