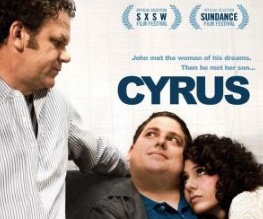 A problem-family comedy that lacks the insight of films like Little Miss Sunshine as well as the laughs of Meet The Parents types, its difficult to to see what genre Cyrus belongs to. The dark comedy that washes over the initial scenes seems to fade with every shot, eventually leaving the audience with a beige drama that isn’t quite sure how it lost its vibrancy.

So, the story; the slightly crinkled but still lovable John (John C Reilly) and Molly (Marisa Tomei) meet at a party, and instantly feel a spark. Both believing that they’ve been given another shot at love they strike up a relationship, and for the first time in years John feels like he has something to live for. There’s only one problem: Molly’s 22 year old son Cyrus. Having lived together in perfect harmony for over two decades, Cyrus isn’t willing to give up his mum to anyone. He’ll do whatever it takes to ensure that the only man in Molly’s life is him.

It’s a fine enough premise, but its one that Cyrus never really fleshes out. Yes, there are a couple of funny moments where Jonah Hill wears an unflattering T-shirt (he’s fat, haha, fat people, eh? Hilarious) and some great Oedipal-based back and forth from the three supremely capable leads, but the comedy always feels restrained. It’s if the makers are afraid that garish, immature “laughter” might blight their film’s deep emotional centre. The problem is, it doesn’t really have one. Jonah Hill tries quite hard to switch between darkly comic and genuinely troubled, but he’s far more entertaining as the former and not really believable as the latter. Not nearly enough is made of the psychological cat and mouse game Cyrus plays with John and just when you think it might be getting interesting, it’s all over. Still, it’s not a bad film, its just a little dull – all of this might have been forgiven if it hadn’t been for one, crucial problem. The camera work in Cyrus is absolutely shocking.

Good production values are a bit like excellent underwear, or that Jesus chap; if they’re doing their job, mostly you’ll never even notice they’re there. Sadly, Cyrus‘s absolutely terrible cinematography meant I spent most of the time wondering whose Nokia 7260 was heading up the filming. “Shaky-cam” might work for explodey films with Matt Damon, but John C Reilly’s features are already too deeply etched to warrant sudden, jolting zooms. There were several moments where I thought we might topple drunkenly into his face. Jay Duplass and Tod Campbell, lead cameramen, you should be ashamed of yourselves. Many a nuanced moment was ruined by the feeling that Cyrus had accidently been spliced with a simulator entitled “So You Want To Crash An Aeroplane”.

All in all, the vomit-inducing camera work, the too-simple story and the underdeveloped attempt to bridge dark comedy and drama means that Cyrus isn’t really worth your time. Which is a shame, because the actors in it almost definitely are.

Previous: Colin Firth Oscar tipped for The King’s Speech
Next: Interview! We talk to Jackboots on Whitehall directors the McHenry Bros.