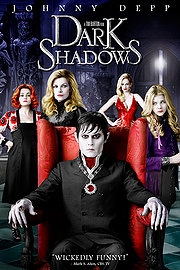 Based on an American soap opera that never quite made it across the Atlantic, Dark Shadows marks the eighth collaboration to date from long-time series fans Tim Burton and Johnny Depp. With Helena Bonham Carter once more on board and Michelle Pfeiffer having practically begged for a part in the adaptation, the stars seemed to have aligned for Burton, who had for many fallen from grace as a result of 2010’s box office success critical disaster Alice in Wonderland. Robbed of his beloved Josette (Heathcote) and cursed to be a vampire by spurned maid Angelique (Eva Green), Barnabas Collins (Depp) is wrapped in chains and buried in the ground for all eternity. That’s the idea, anyway. Accidentally dug up in 1972 by a group of construction workers, Barnabas quickly sates his thirst for blood and returns to his much-loved home Collinwood, only to find the Manor in ruin and his dysfunctional descendents in debt. Tasked by matriarch Elizabeth (Pfeiffer) with resurrecting the family fishing business despite his strange feelings for the Collins’ new governess Victoria (Heathcote again), Barnabas soon finds himself once more at the mercy of witch-turned-competitor Angelique’s Angel Bay Fishery.

Considering that all you likely know about Dark Shadows – before (and after) you have actually seen the film – is that it is the story of an out-of-time vampire haunted by an ageless witch, it might come as something of a surprise to learn that the original series did not introduce its first supernatural element until six months into the programme’s run. Opting instead to adapt the storylines for which the show has since become best known, Burton puts Depp’s vampire front and centre, inadvertently committing the same mistake that crippled Alice two years ago; crediting Depp’s performance before that of the film’s natural lead, in this case Bella Heathcote’s Victoria. In opting to focus elsewhere, Burton once again derails his film. Barnabas aside, there isn’t a single character in Dark Shadows that interests on any meaningful level. Heathcote brings little to her dual roles as Victoria and Josette, though this is largely due to her restricted screentime; Michelle Pfeiffer is given nothing to do but stand on staircases authoritatively; Chloë Grace Moretz sulks for an hour before casually turning into a werewolf (it’s no big deal, apparently, so hardly worthy of a spoiler warning); and Helena Bonham Carter is given a character arc so utterly redundant that she might as well be called Miss D. Opportunity. While Eva Green may get off relatively lightly, it is simply by virtue of having the occasional bit of plot to do. By the time we get to the effects-heavy finale, half the characters have been sidelined completely.

Dark Shadows‘ biggest problem, however, is that it’s just so boring. While many have blamed its lack of success on Burton’s self-indulgent straddling of genres, presumably directing each scene to reflect whatever mood he might be in at that particular moment (often a bit “meh”, it seems), it is the occasional moment of blind darkness, drama or comedy that save this from being one of the worst movies I have ever seen.  There are brief flashes of interest; many if not all of which are featured in the film’s trailer, as are all of the important plot points, the best gags and the full line-up of contemporary music cues. The rest of Dark Shadows‘ excessive 113 minute running time is comprised solely of Barnabas stroking fireplaces, certificate-bending smut (I don’t mean to sound like IMDb’s Parents’ Guide, but at one point Angelique removes her knickers and drapes them over a bound Barnabas’ face) and an Alice Cooper cameo that apparently warrants the same infantile joke on more than three separate occasions. Dull rather than dark and poorly lit as opposed to shadowy, Dark Shadows has more in common with The Royle Family than The Addams Family. (And no, that is not a compliment; instead of award winning satire, the comedy in Dark Shadows is limited to Barnabas’ discussion of birthing hips and the suggestion that Alice Cooper looks like an ugly woman.) It takes a good half hour to realise that things aren’t going to get any better, and by that point it’s too late to ever get your money back.